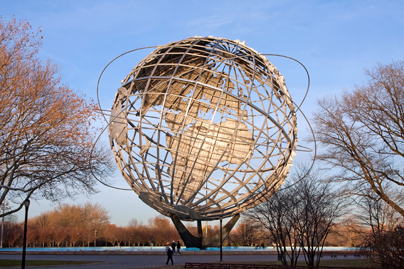 Queens is the physically largest borough and second largest in population, notable for its combination of a predominantly suburban landscape and exceptional transportation options to both Manhattan and Long Island. Named for the Portuguese Queen Consort Catherine of Braganza, who married England's King Charles II in 1662, Queens today is the most ethnically diverse county in the United States, with 138 languages spoken. With two major airports, the Long Island Railway, 12 NYC Subway lines, and three highways, there is no underestimating the convenience of transportation options which keep Queens a perennially popular area for new families and new arrivals to the United States. Just across the river from the East side of Midtown, Long Island City (LIC) has attracted artists as a "secret SoHo" of sorts ever since the sculptor Isamu Noguchi first opened his studio there in the 1961. Today, his namesake museum, Socrates Park and PS 1 Contemporary Art Center are just a small sampling of the cultural attraction of this area.  Loft conversions and traditional apartment buildings dominate the area. However, residential streets and an ever-evolving collection of ethnic enclaves represent the heart and soul of Queens. Just a stone's throw from LIC and the 59th Street Bridge is Astoria, which is fast becoming a regular stop for foodies and world cuisine afficianados . Jackson Heights, Elmhurst, and Corona combine to create a colorful mix of influences where foods, festivals, traditions, and tastes can change from block to block. Rego Park, Forest Hills, and Kew Gardens are dominated by stately homes and large apartment buildings, enjoy a wide array of cultural influences, and are punctuated with ethnic specialty shopping and big name retailers. While Flushing plays host to both the Mets and the US Open, it also hosts the new heart of commerce and culture for New York's Chinese community. The diversity of New York City is celebrated in Queens: in faces of the residents, in the selection of housing, and in the plethora of parks, museums, cuisine, and cultural attractions, which welcome neighborhood veterans and newcomers alike.