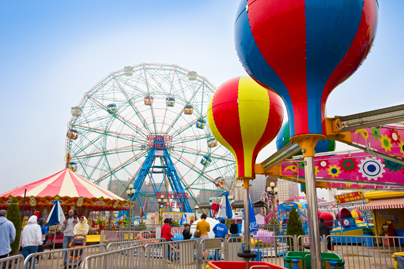 With 2.6 million residents and the second largest physical area of any borough, Brooklyn offers distinct neighborhoods and attractions. Originally a Dutch settlement, called Breuckelen, neighborhoods like Midwout (Midwood) and VlakBos (Flatbush) date back to the 1600's. The borough was an independent city until 1898 and by the 1920s it was NYC's most populous borough, a title it has now retained for almost a century. Many icons of New York abound in Brooklyn: the Coney Island boardwalk, Juniors Cheesecakes, the bridge views from DUMBO and the beautifully planned Prospect Park are just a few. In recent years, a Brooklyn renaissance has brought many new arrivals into the borough. From Brooklyn Heights to Boerum Hill, Carroll Gardens to Crown Heights, and further out to areas like Bay Ridge and Brighton Beach.  Even the once-rough streets of Red Hook are now graced with a Fairway market and revitalized park with beautiful Statue of Liberty views. Like the diverse residents, the buildings of Brooklyn run the gamut. Historic areas like Vinegar Hill rub shoulders with modern glass and steel construction. Large apartment buildings, single-family homes, condos, and brownstones are all typical Brooklyn residences. From bohemian enclaves on the Williamsburg waterfront to Victorian era mansions in Fort Greene, Bushwick and beyond, the enduring popularity of Brooklyn is apparent in the mix of restoration and new construction, which appears in virtually every neighborhood.